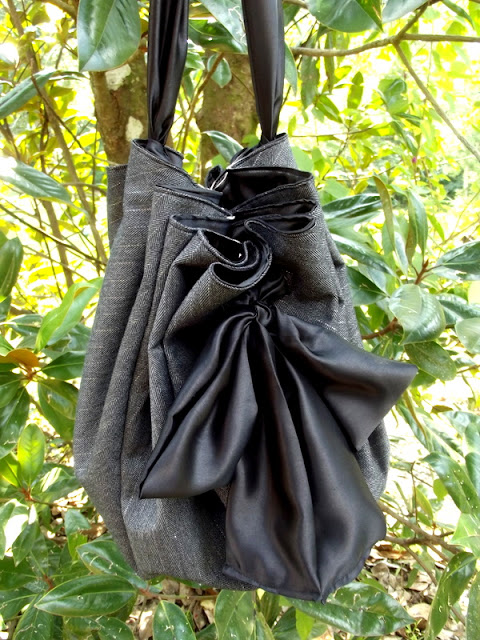 I always think of sewing in relation to shapes. Most everything can be simplified down to a series of basic shapes connected together. Simple minds can only handle simple concepts I guess. Anyway,  I was mulling over something quick and simple I could throw together for a fall/winter purse while I was having to sit still to get my hair done the other day. An idea popped into my head to make a bag from a circle. 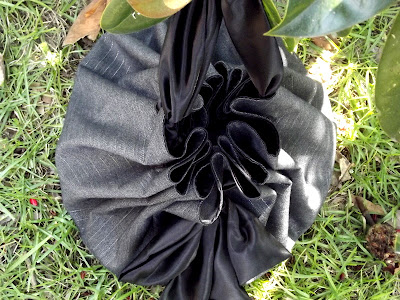 I tried out my theory later that day at dinner at Olive Garden on one of those cardboard coasters they give you...and decided my idea was worth trying. (and pretended my 2yr old was the one who messed up the coaster) I chose grey suiting fabric for the outside, and black satin for the inside. It has a bit of an academic vibe... 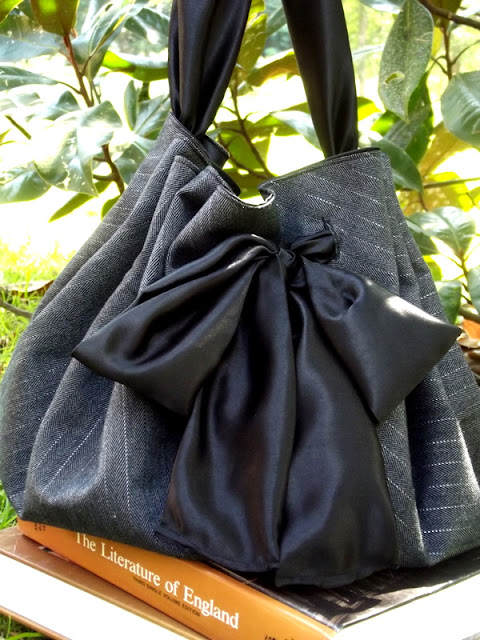 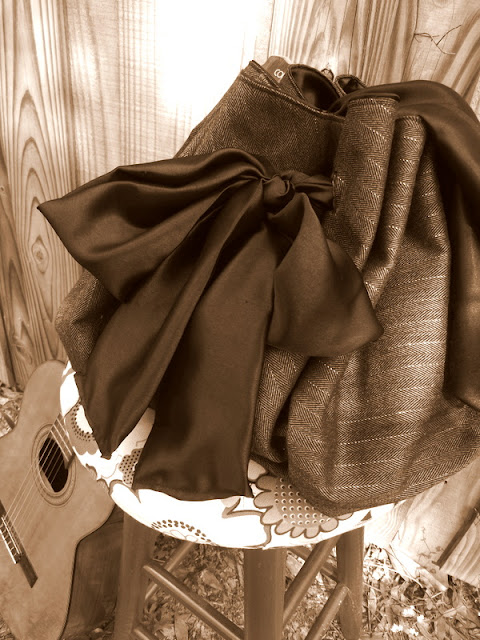 ...and every bit classy. 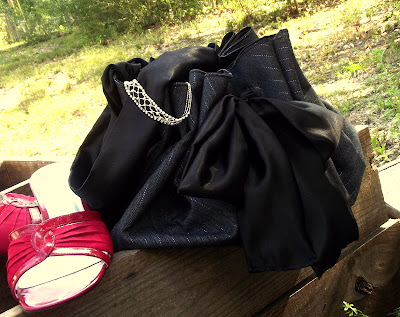 Have I sold you on making one yet? It isn't hard, promise. To start, you are going to need three circles, one lining, one outer fabric, and one of interfacing. To make a circle, fold the fabric in half. 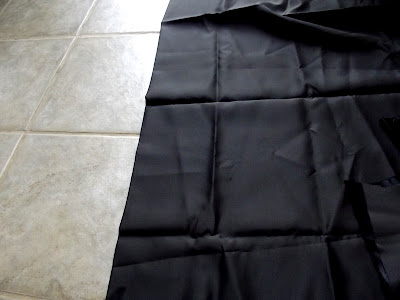 Fold it in half again. This leaves you with a corner, four layers thick and folds along the edges. 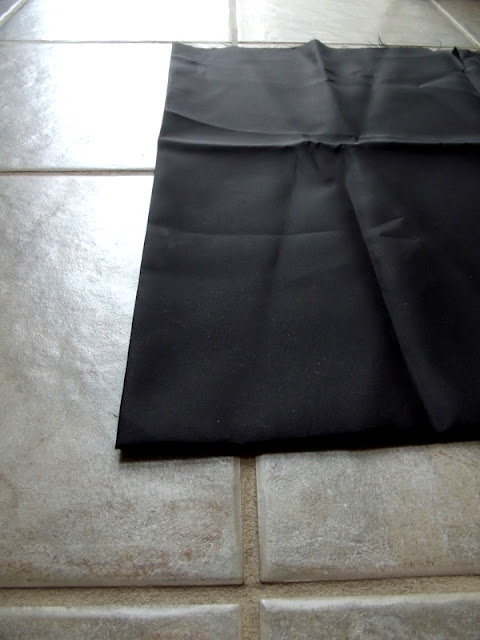 Starting at the corner, mark out 18 inches along one edge. 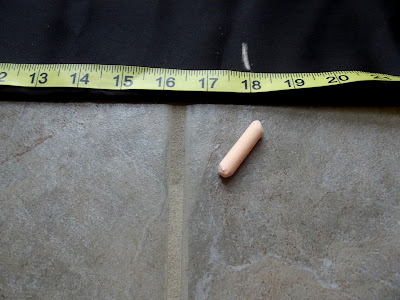 Hold your finger on the corner and continue marking out 18 inches in an arc until you get to the other fold. 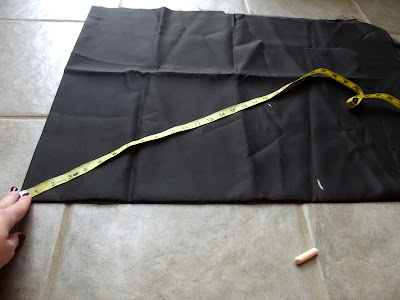 Cut out along your marks. 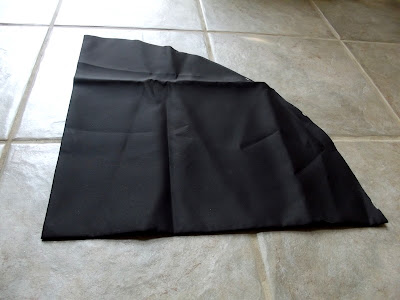 Open it up and you have a perfect circle 36 inches across. 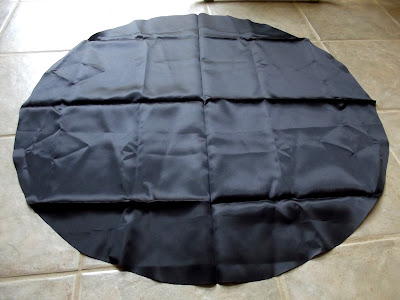 I used lightweight interfacing between layers. 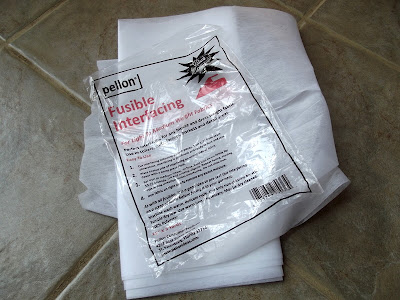 I had to cut this out in sections because it came in narrow strips. 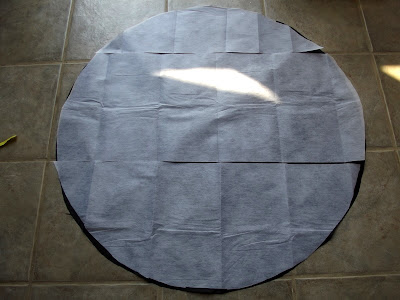 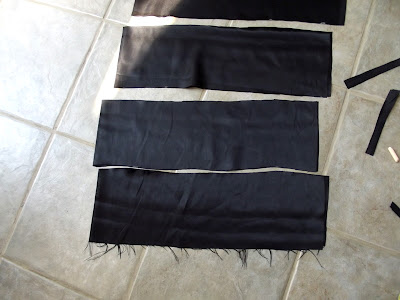 To assemble, iron the interfacing to the one of the circles. Place right sides together and pin. I'm not normally a gal to use pins much, but in this case, I think it is super helpful to do so. Satin is slippery and circles can be weird to sew sometimes. 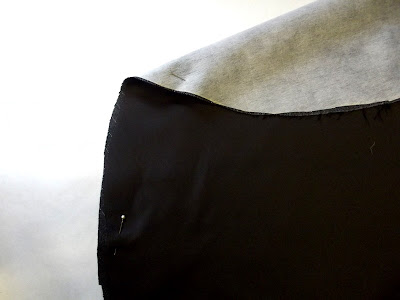 Sew around the edges and leave an opening to flip it right side out. 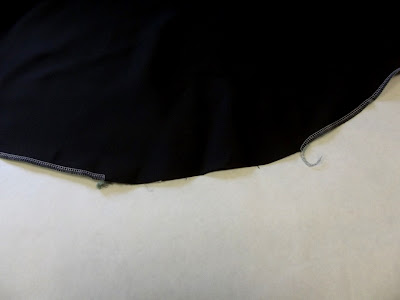 After you flip it right sided out, iron around the edges. That's another unheard of thing for me to do...iron...but, really, you need to do it here. 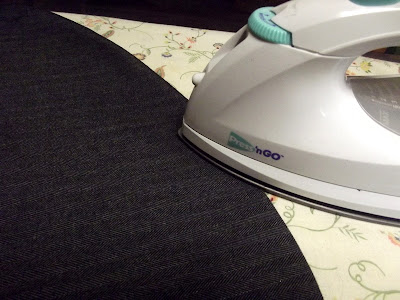 Once it is all ironed all tidy like, top stitch around the whole thing. 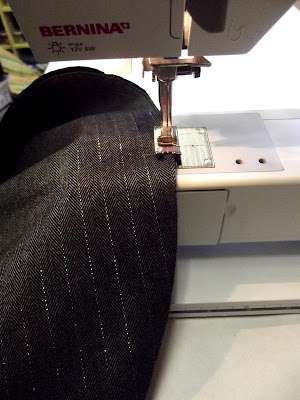 OK, now you need to make some button holes. Take a deep breath...you need to make 37.  Its not that bad really! Actually, this is the first time I've ever made something using a button hole...and of course I needed 37 of them. Nothing like over kill or anything. Point being, I survived them and you will too. I made a 7/8" button hole every three inches. Make the button hole an inch and a half from the edge. 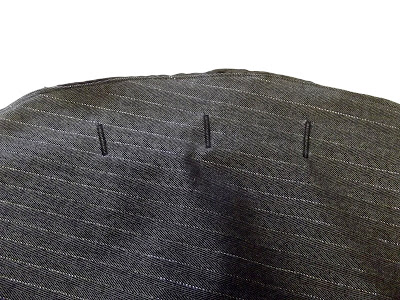 Once you've finished all of them, cut them open. I fray checked them all just for good measure. 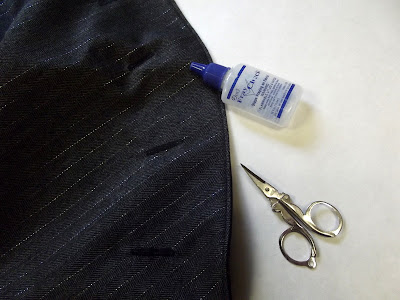 By the way, if you make this using a different size circle, make sure you have an ODD number of button holes. It has to be on odd number for the sash to be able to tie in the front. Now you need to fold your sash, wrong sided out. 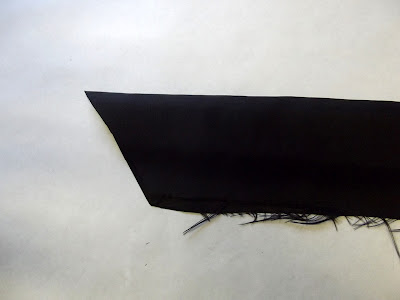 Sew along the raw edge. (Don't cut your ends like this, I chopped these straight later) 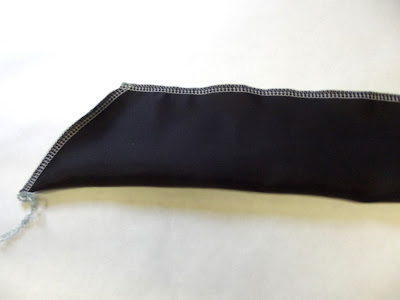 Iron it flat with the seam in the middle of one side. Ironing twice in one day! Someone check my temperature! 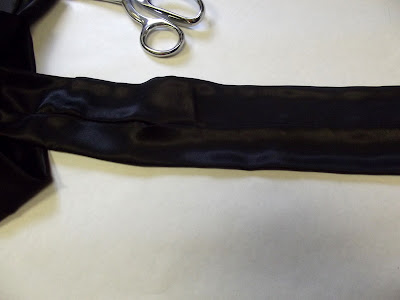 Thread your sash in and out of the button holes, gathering the top as you go. 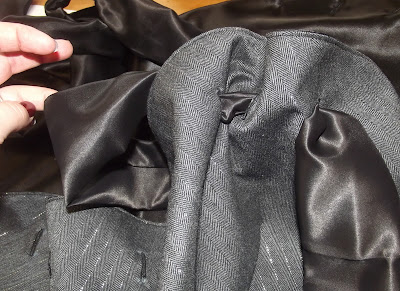 Make the opening as large or small as you like and tie the excess. 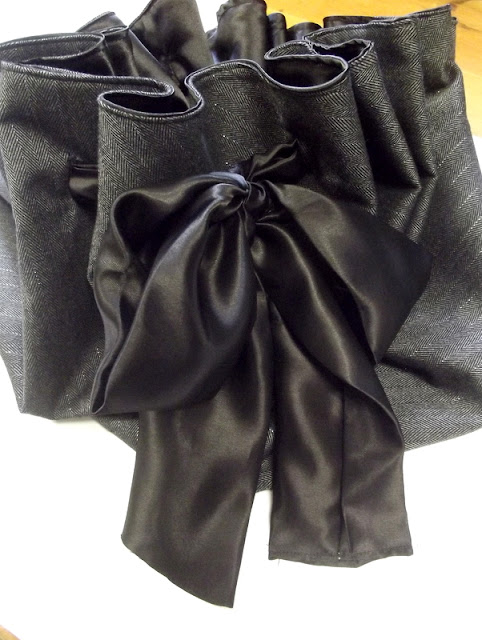 Sew the shorter piece you cut for your handle just like you did the sash. Tie it to one of the inside loops on either side of the bag. This makes it so, if you feel like reversing the bag and using the other side, you can just untie everything and flip the bag. 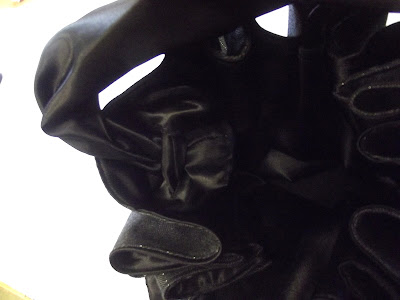 All finished. See? I told you that wasn't hard! It maybe wasn't quite as fast as I had in mind, but it certainly fits the ticket for simple. 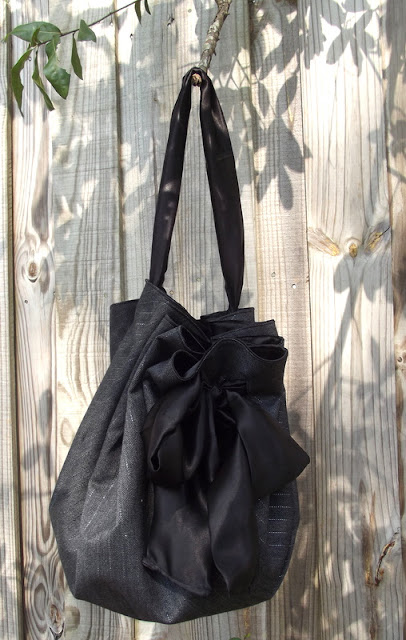 It even looks great from the side! 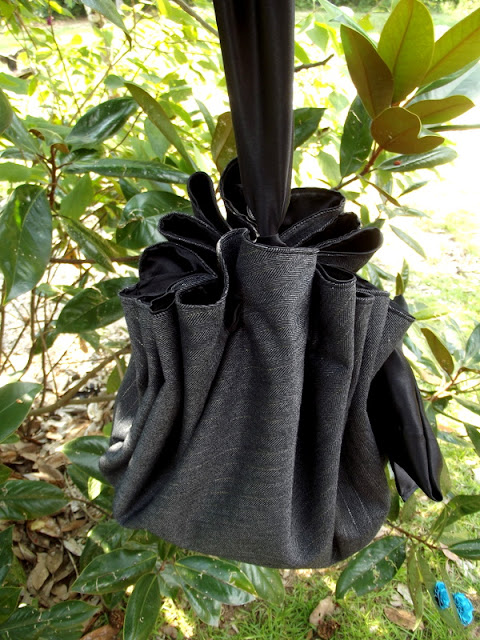 I really like the idea of switching out the sash to another color if the mood ever strikes me. In the meantime, I'm pretty satisfied. 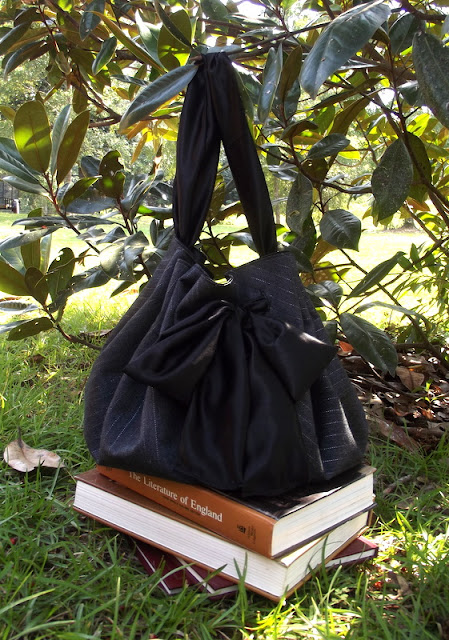 " O give thanks unto the Lord; call upon his name: make known his deeds among the people."
Psalm 105:1

Linking to:
Tatertots and Jello
Lolly Jane
Be Different Act Normal
Six Sisters' Stuff
Under the table and dreaming
Between Naps on the Porch
Goodbye City Hello Suburbs
My Girlish Whims
Posted by Abby at 7:07 PM 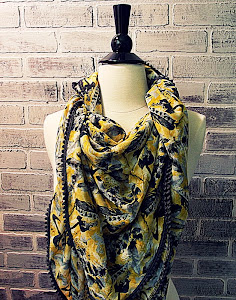